This soup is named after pandours, originally Serbian and Croatian soldiers who were on duty at the southern borders of the Hungarian kingdom. Later in the 19th century, between 1867-1881 (before the national gendarmerie was established), those officers who served as armed patrolmen in the Hungarian comitats were also called pandour.

Pandour’s soup can be made in different ways depending on which part of Hungary you are. It can be prepared with pork, beef or mutton, there are recipes that also call for pork brains. But there are also some fixed ingredients: carrot, parsley root, mushrooms and mustard. The soup is usually seasoned with dill and marjoram, but bay leaf also goes well with it. 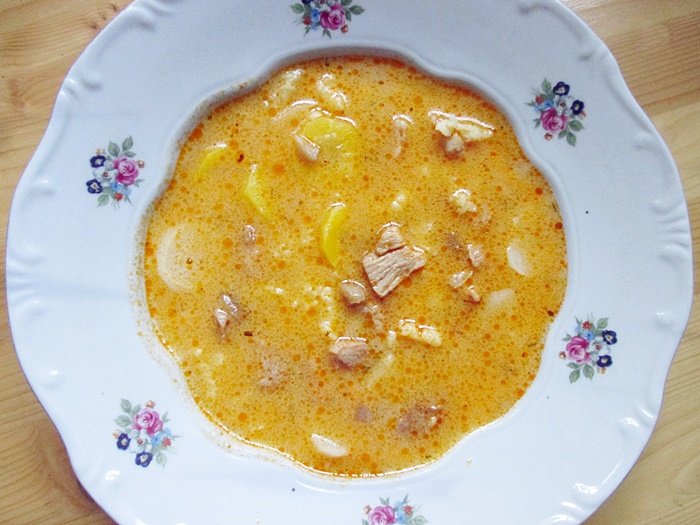 For the grated noodles:

In a soup pot fry chopped bacon until crispy. Add finely chopped onions to the bacon fat and sauté until translucent. Stir in diced pork and brown a bit. When the meat takes some color, pour in water, just enough to cover 3/4 of the food and sprinkle with paprika, salt and pepper. Cover and slowly simmer; stir it from time to time and add more water if needed.

In the meantime knead egg and flour into a dough. Grate it through the large holes of a box grater, spreading out the noodles on a clean kitchen towel.

Once the pork is halfway done, pour in 1,5 liters / 6 cups of water and add chopped carrots, parsley roots and mushrooms to the soup. Season with dill, marjoram and mustard. Cook over medium heat. Whisk together flour, sour cream and 1/3 cup of water in a bowl. Once meat and vegetables are tender, pour the sour cream mixture into the soup, also add the grated noodles and cook for about 5 minutes until pasta becomes soft.