Palots soup was invented by Johann Gundel, the founder of the Gundel dynasty. Johann arrived to Hungary in 1857 to try his luck. He made an incredible fast and ambitious career, in 1867 he was called upon to organize the banquet after Francis Joseph’s coronation cerenomy. Two years later he ran his own restaurant. One restaurant followed the other, later he opened hotels, as well. In less than 10 years he was elected as president of the Hoteliers and Restaurateurs Association.

It was a part of Gundel’s success that his guests were prominent personalities, among others writers, politicians, composers. The Palots soup (that is also suitable for a one dish meal) was inspired by Kálmán Mikszáth, a novelist, journalist, and politician. He was the most famous Palots in Hungary. Palots formed an ethnic group in the 19th and 20th centuries. Their home was the Highlands, north from the Mátra and the Bükk mountains, in the Nógrád basin and in the Ipoly valley. 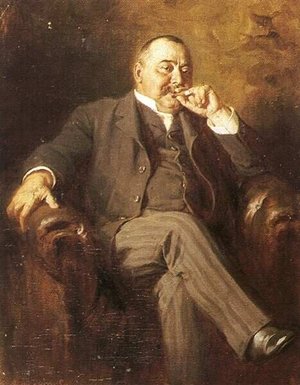 There are three legends circulated about the creation of Palots soup. According to a story Mikszáth asked Gundel to prepare a dish that he would have a relish for. Others say that Gundel cooked the soup as a surprise for Mikszáth’s birthday. According to another legend the soup that contained the Highlands flavours was first prepared for the inauguration of the Mikszáth-room in the István Főherceg Hotel. The soup was originally made from mutton, but of course it can also be made from beef or pork. 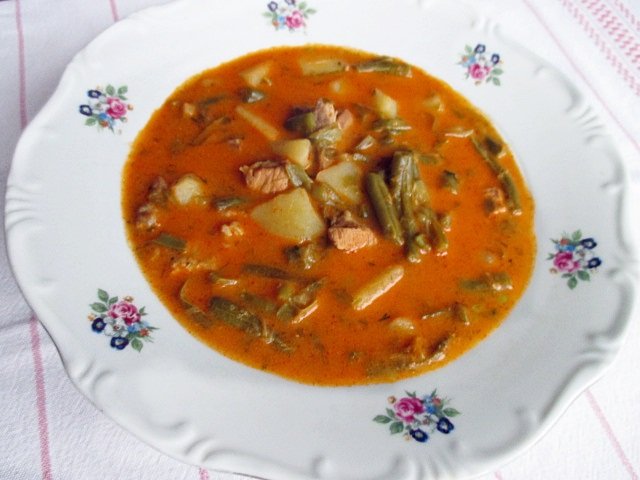 In a stew pot heat up the lard, add the finely chopped onion and cook until it becomes “glassy”.
Add the meat cubes and stir until they turn white.
Remove the pot from the heat, add paprika, chopped garlic, caraway seeds and stir to get the meat covered evenly with the spices.
Put it back over the heat and cover with water (about 1 liter ~ 4 cups). Add salt and bay leaf. Stir it from time to time while cooking.
If the pork is half-cooked, add the potato cubes and the cut green beans, and pour water on (0,5-1 litre ~ 2-4 cups).
If the meat is tender, in a little bowl mix up the sour cream and flour. Add a ladle of soup, stir together, then pour in the mixture while stirring constantly. Simmer the soup for about 3-4 minutes to eliminate the raw flour taste.
Turn off the heat and sprinkle with chopped dill.