Similar to layered potatoes this egg barley dish is made up with sliced sausages and hard boiled eggs, it’s, however, also turbocharged with an extra layer of lecsó ( you know the Hungarian ratatouille made with wax peppers and tomatoes). Of course sour cream can’t be omitted. Attention! Layered egg barley (rakott tarhonya) is heavy and kicking, after eating it there won’t be surplus space in your stomach for other foods for a while. 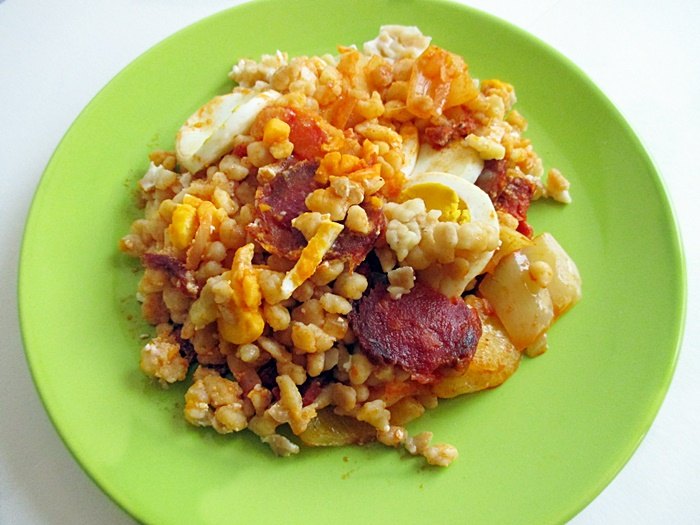 In a deep pan heat 1 tablespoon lard, add egg barley and cook, while stirring constantly, until its color turns light brown. Pour in 3 cups of water and sprinkle with 1 teaspoon of salt. Cover the pan and over low heat cook until tender and cooking liquid is absorbed completely. During cooking stir the noodles from time to time and add more water if needed.

In a separate pan heat 1 tablespoon of lard, add finely chopped onions and sauté until translucent. Add diced peppers, sprinkle them with paprika, ground black pepper and 1 teaspoon of salt. Cook for 4-5 minutes, then stir in tomatoes and continue to cook until almost tender. Turn off the heat and set it aside.
Preheat the oven to 180°C / 356°F.

Grease an ovenproof dish. Put half of the noodles in the bottom of the dish. Spoon the lecsó on the top evenly and spread 1/3 of the sour cream on it. Arrange sliced sausages and boiled eggs on the lecsó layer, then cover with the rest of the egg barley. Spread the remaining sour cream on the top. Cook in the oven for 30 minutes or until top is light golden brown.