Caraway seed soup belongs to the group of those dishes that every Hungarian knows, but cracks in its reputation can’t be hidden. Caraway seed soup is very divisive, it gives most of my countrymen nightmares to think of the dreaded soup, but a minority of people loves it since it stirs up pleasant memories in them. Caraway seed soup was one of the poverty meals that were eaten when there was nothing else to put on the table, during and after the World Wars.

Caraway seed soup is often called as the roux soup because it fundamentally consists of golden brown roux, water and salt. Croutons and paprika weren’t added in famine times, it was the sign of the coming of better times when these ingredients were available and weren’t considered luxurious for adding to the soup. Later the soup was improved by stirring in beaten eggs, and nowadays it’s the widespread practice to make caraway seed soup this way. (Despite the beaten egg content caraway seed soup should not be confused with egg drop soup.) 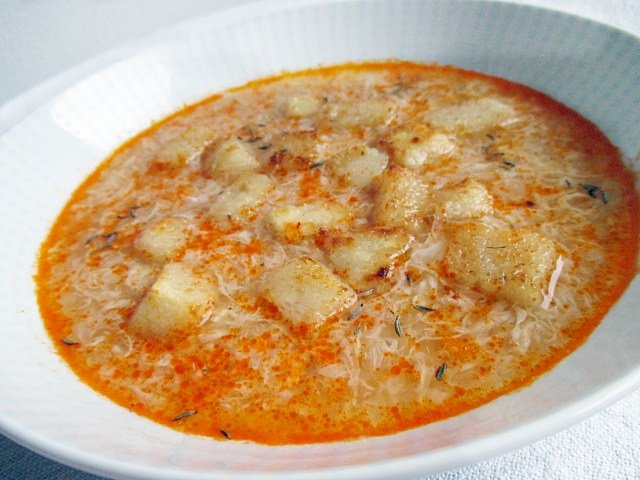 Heat lard in a pot, add caraway seeds and, a few seconds later, flour, and over medium heat cook until the roux reaches the golden brown stage. Remove from the heat, stir in paprika, and immediately pour in water to prevent paprika from burning. Stir until roux is well blended with water. Season with salt and pepper, bring it to a boil while stirring constantly, and over medium heat cook for 10 minutes. Beat the eggs and pour into the soup in a fine stream while stirring constantly. Continue to cook for further 2-3 minutes. Serve hot with croutons.